A vulnerable, real-life account, of struggles with weight loss and fitness

I have wanted to lose 20 pounds since I was 15 years old, perhaps even before that. I recall at the beginning of grade six my paediatrician told my mother and I that I needed to lose 15 pounds. At the time he was suggesting that my BMI (Body Mass Index … the Betta Mi Ignore index) was above what it needed to be. The regular weight for a child my age (I was about 9) was 85 pounds, and home girl was a whopping 100 pounds.

I hadn’t noticed my weight much until then. The week after the doctor’s appointment, coincidentally my friends started discussing their own weight (I kept silent, eating my lunch in front of the fan by my desk listening to all these slim and athletic kids talk about their weight when I was the FAT one). I started comparing myself to everyone else in the class. I certainly wasn’t the biggest… but I felt like it.

I loved food too much to starve myself, plus I had cool enough friends who never mentioned weight and my family never saw me as FAT or rather never told me I was FAT. To be honest I didn’t think I LOOKED FAT. I mean, my frame was similar to that of my classmates and it puzzled me why I weighed so much more.

Entering first form (grade 7) was a pretty big change from prep school. There were way more diverse backgrounds here and I embraced the change (after a little while). By third form (grade 9) my weight became an issue again … to me at least. I just always felt like I was so much heavier than everyone else. In swimming class, as we were sitting on the side of the pool waiting for instruction, a classmate (we had been friends from prep school) said to me “wow your thighs are really big, I didn’t realize that before”. Being the seemingly self-assured person I am, I said “yeah… thanks” and rolled my eyes. But her comment didn’t help my already struggling body image.

This further worsened when I had gone to the doctor again and I found out I was 130 pounds. This doctor didn’t make a fuss about my weight and told me I was healthy overall and my weight was fine. I felt like I finally got a hold of things. I thought I was closer to the weight of my classmates at this point and felt proud; Until we were discussing weight again and I realized I was still about 15 pounds heavier than most of my classmates. WELP.

My body image didn’t improve as boys came into the equation. I wouldn’t say I was socially awkward, because I was always the one to get the conversation started; but I was never really interested in relationships like my other classmates and as such had a slew of male friends but no specific love interest (but a few crushes here and there). Eventually, one guy friend who I had grown quite fond of said to me “maybe you should lose some weight, you would look so amazing if you lost just a bit of weight”. I retorted that I would look like a capital “P” because by then the blessing/curse of the family’s bust had descended upon me. He responded “yeah, that would be sexy”… I stopped talking to him for a while, then eventually forever.

I went through pretty much all my high school life (and the first year of university) telling myself I would be better if I was slimmer. The biggest “compliment” I had gotten from a friend was her saying “no, Nicolette isn’t FAT. She is like where slim ends, anyone bigger than her is FAT“. In hindsight that was a pretty messed up thing to say, but the only thing I really heard was that she said I was not FAT and that was good enough for me. A worrying memory of how bad my self-image was at the time.

It didn’t help either that one of my parents’ coworkers would always point out my weight gain – “what a way yuh FAT“; “no man yuh a get big”; “a wah yuh a eat over the holiday”. Why are people like this?

All these external things… added up. However, my family remained consistent in not mentioning weight at all, even when we went to Toronto one winter and I gained 20 pounds in a week (I still hide those photos).

FIXING THE “FAT”, NOT THE PROBLEM 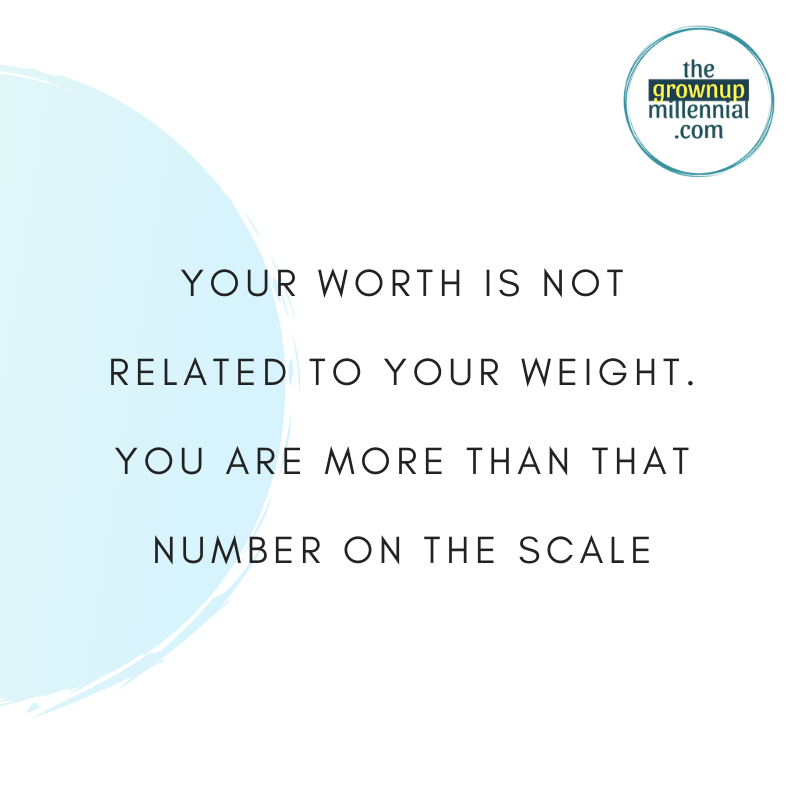 I am not sure what’s responsible for my improved body image: whether it was just the constant affirmations from my parents; maturing to realize and appreciate that there were different ideations of beauty; my boyfriend’s (and now husband’s) appreciation for all my curves and edges; or just being sick and tired of feeling inferior.

After several years I decided I would start doing some kind of exercise (we had a semi-gym at home, which I used sparingly for a few years).

I started with P90X. This is not a good programme for people who are beginners trying to lose weight, I think it is better suited for people who would like to sculpt after weight loss.

After that, my mother wanted to go on a raw food diet and I decided I would do it with her for two weeks. The first week was the most difficult, and by the second week I was thinking I could really live like this … minus the raw cashews. I had so many raw cashews for those two weeks I never want to see a cashew ever again lol.

Then, I tried Insanity by Shaun T. This worked. It was a long programme and I barely followed the nutrition guidelines but I saw results. People were commenting on my weight loss.

I felt great. But the important part of achieving fitness is embracing a lifestyle. I was not really doing this. I was looking for one quick fix after another. A close friend of mine began calling me Oprah – referring to her weight fluctuations. I was slim, and then I wasn’t, and then I was, and then I wasn’t. I would be in a good place, eating and exercising then I would just have KFC everyday and not exercise for months at a time.

Eating has always been an important part of my family’s bond. We eat together to celebrate every occasion and food brings us together. I realized that this spilled over into my friendships. One of my very best friends said to me one day “all we ever do is go out to eat. Do you realize that?”… the truth is I hadn’t until he said it. Food was a big part of my life and it was difficult to attempt to cut food out of my life.

TRYING TO GET IT TOGETHER

When I finally decided I wanted to embrace fitness it was an exercise in mental fortitude. Attempting portion control; disciplining your body – not eating after a certain hour; managing cravings; increasing water intake. The whole process was mental. It was a conscious effort to be better, to do better. This drive to achieve fitness (or just sustainable weight loss) was not brought on simply by a desire to be slim… the main driving force was my health.

I had gone to the doctor and she took my blood pressure three times and each time it was pretty high, she insisted that she would have to send me to a specialist if I came back with such a high reading. I had gone to another doctor for another issue and after I came off the scale she said “No no no. For a young girl you should not be weighing this much. You’re going to have to do something about this”. When I shared this with my mother she simply said

A CURVEBALL TURNED INTO MOTIVATION

Hypertension, along with everything else you can think of (except diabetes), runs in my family. It has affected every member of my family (on my father’s side). One of my aunts started taking medication when she was 19. I was determined that I would not be on medication. So, I wanted to be fit.

It has been the most rewarding/disappointing/inconsistent journey I have decided to embark on.

I was never a fan of going to the gym and insisted I could do everything on my own. I went out and bought an elliptical machine and started designing my own exercises. This worked for months, then somewhere along the way it stopped. I enrolled in a gym and I haven’t turned back since. Going to the gym is now a part of my routine. It’s more than just going to the gym for the sake of going to the gym (or to post it on Instagram) but it symbolizes your commitment: to get dressed, leave home/work, commute to the gym and then commit to workout for more than 45 minutes. It also made me a bit more serious about working out. At home I could do anything I wanted really, with loose form or reduced reps but at the gym you wanted to make sure you were doing everything right.

A CONTINUOUS WORK IN PROGRESS

I really could go on forever about attempting to achieve fitness, but I will just say it is a work in progress. Don’t be too hard on yourself if you don’t meet your weight goals or if you end up buying KFC after making a salad for lunch. It’s always about moderation, and just trying to make sure you catch yourself before things get out of hand. A close friend of mine gave me this piece of advice when I just started the gym – “don’t watch the scale, just do the exercises and go off how you feel and how you look”. This is really the best advice I could’ve gotten.

For anyone thinking about a workout routine,  #IdealShapeUpChallenge  is a great place to start because you can do it at home or at the gym. If I go to the gym, I try to do medium to high intensity cardio for 30 minutes before doing the workouts. I have also taken a break from eating meat and rice. I haven’t had rice in months and eat meat perhaps once a week. I also found that a fitness tracker has definitely helped me to stay on track. Trying to meet those daily goals or checking stats after a workout keep me motivated to be better and do better.

This year (and for coming years) resolve to be more fit and work on YOU, at a pace you appreciate and are able to manage. No more quick fix remedies, embrace the lifestyle … at your own pace.

A quote for you:

“everyday is an opportunity to learn”